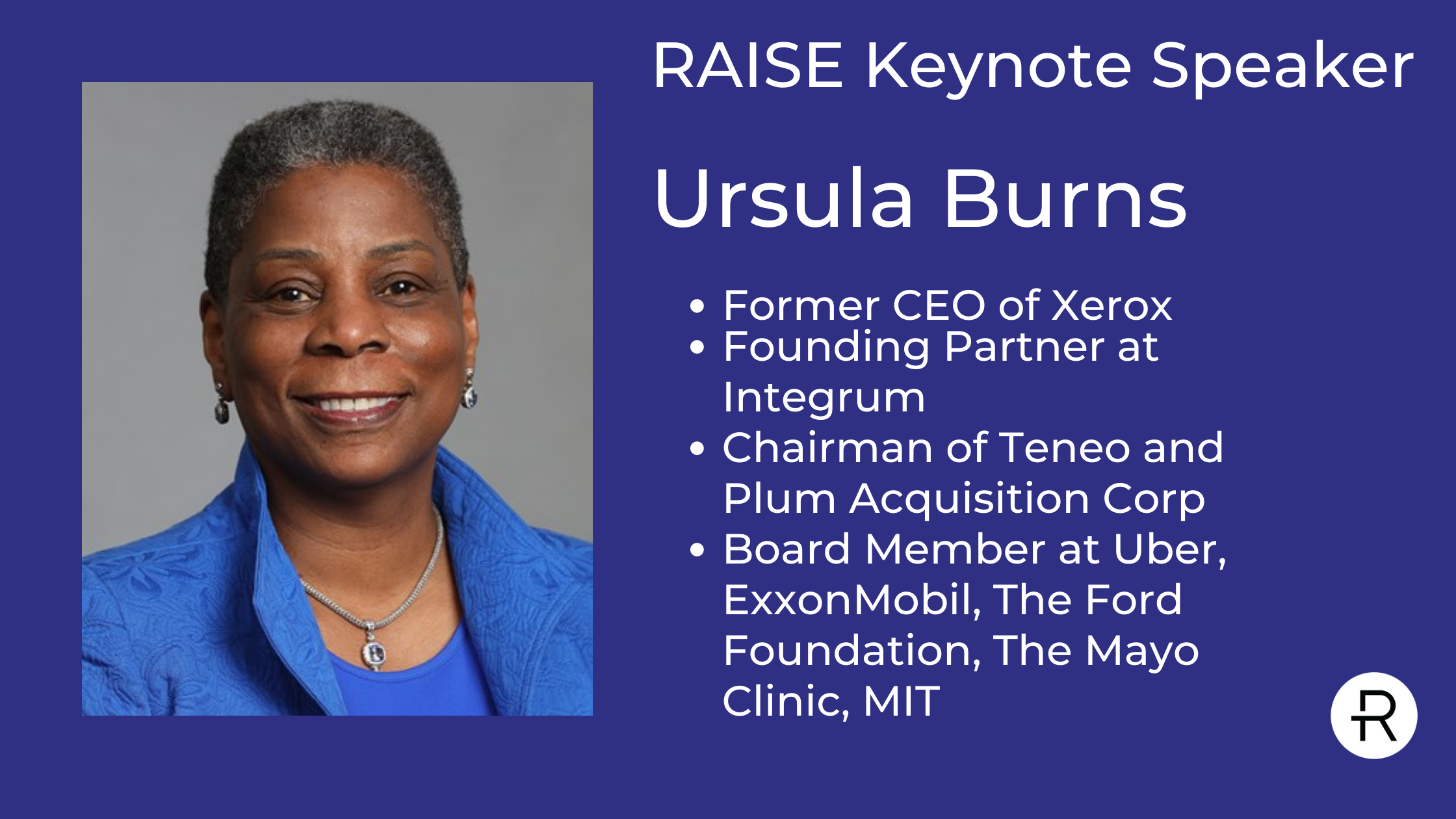 We are thrilled to announce that we’ve added Ursula Burns as our keynote speaker for this year’s RAISE Global Summit. In 2009, Ursula became the CEO of Xerox, making her the first Black woman in history to be the CEO of a Fortune 500 company. She’s currently a founding partner at private equity firm Integrum Holdings, and Chairman of Teneo and Plum Acquisition Corp.

A highly accomplished businesswoman and an outspoken champion for inclusive capitalism and racial and DEI issues, Ursula has shared her unique expertise and perspective over the years as a board member of Boston Scientific, American Express, and Nestle, and currently sits on the board of Uber, ExxonMobil, The Ford Foundation, The Mayo Clinic, MIT, and other organizations.

Ursula will be joined by Akkadian Ventures’ Mike Dinsdale, former CFO of Gusto, DoorDash, and DocuSign, for a special Q&A discussion. Ursula and Mike are co-founders of Plum, a SPAC platform which they recently took public on NASDAQ.

Their conversation will touch on a range of topics, including the importance of mentors in fueling Ursula’s career, her work leading the White House national program on STEM, and what we can all do to move towards a more inclusive and sustainable model of capitalism. Ursula will also share some key takeaways from her new book, Where You Are is Not Who You Are.

Ursula Burns was the CEO of Xerox Corporation from 2009 to 2016 and Chairman of the Board from 2010 to 2017, after having been appointed President in 2007. After her retirement from Xerox, Burns was appointed as Chairman of VEON, Ltd. in 2017. Burns became Chairman and CEO in December 2018 until June 2020. Burns is a member of the ExxonMobil, Uber Technologies, Inc., and Endeavor Group Holdings, Inc. Board of Directors. She is also the Chairman of Teneo Holdings LLC and Plum Acquisition Corp. I, as well as a founding partner of Integrum Holdings, a private-equity firm.

‍Mike Dinsdale has embodied the “modern unicorn” CFO for over 20 years, with strategic expertise in building high-growth international companies that consistently exceed growth targets. Dinsdale has successfully secured over $1 billion in financing and been part of great teams generating over $100 billion in value. Most recently, Dinsdale was the CFO for Gusto from 2017 to 2020 and prior to that was CFO at two generational, market leading software companies, DoorDash, from 2016-2017, and DocuSign, where he also served as Chief Growth Officer, from 2010-2016. Dinsdale also serves as a board member for private software companies and is on the Board of Directors for WildAid.

You won’t want to miss this intimate and engaging discussion with two remarkable industry leaders—sign up today for the RAISE conference. The program won't be recorded or published—you just have to be there!